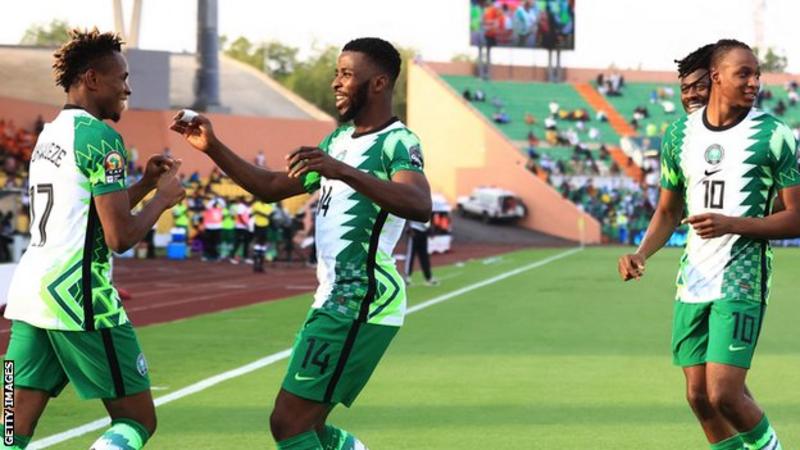 Nigeria cruised to a 3-1 victory over Sudan at the Africa Cup of Nations which booked their spot in the last 16.

Samuel Chukwueze set the ball rolling for the Super Eagles in the third minute from a Moses Simon pull-back.

Nigeria doubled their lead on the stroke of half-time when the ball went in off Taiwo Awoniyi and Simon rolled in a third straight after the restart.

Walieldin Khedr pulled a goal back for Sudan from the penalty spot after Ola Aina was penalised for a challenge.

The Nigeria right-back was adjudged to have fouled Secretary Birds defender Mustafa Karshoum, pulling his shirt as a corner was swung in, following a video assistant referee review.

Nigeria had won their Group D opener against Egypt 1-0, and the result against a side ranked 125th in the world was never in doubt after Villarreal forward Chukwueze slotted into the bottom left-hand corner from the centre of the box.

The Nigeria Football Federation’s decision to replace long-serving coach Gernot Rohr just four weeks before the tournament looks to have paid off, as interim boss Augustine Eguavoen once again saw his side put in a largely dominant performance in Garoua.

The second was a somewhat freak goal, as a clearing header from Salaheldin Nemer cannoned in off Awoniyi, but the West Africans could have had further first-half goals as William Troost-Ekong had an effort blocked and Joe Aribo hit the post.

The Super Eagles, who are chasing a fourth Nations Cup triumph, know they will face a third-placed side in the last 16 if they can top Group D, and they round off their group campaign against Guinea-Bissau on Wednesday (19:00 GMT).