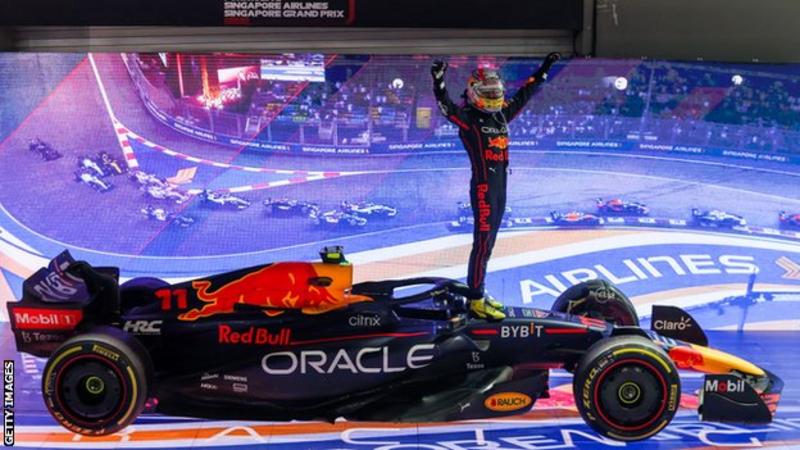 Title leader Max Verstappen finished seventh after a frustrating race that included a major error from the Red Bull driver.

Verstappen can win the title in Japan next Sunday, but would need the results of Perez and Leclerc to go his way.

However, Perez is under investigation for a safety car infringement.

Race stewards are due to rule on any penalty after the race. If given a time penalty, he could forfeit the win.

Lewis Hamilton also had a difficult evening under the lights of Marina Bay and finished only ninth after two errors.

The seven-time champion had been stuck behind Ferrari’s Carlos Sainz, who took the final place on the podium, after losing a place to the Spaniard at the start. He made a mistake as he sought to get close enough to pass, running wide at Turn Seven and damaging his front wing.

A second error, running wide at Turn 14, allowed Verstappen passed him for seventh.

Verstappen’s error was similar. He was trying to pass McLaren’s Lando Norris after a restart from one of five safety car periods, two real and three virtual, but locked up and slid straight on, also at Turn Seven.

Verstappen would need to gain eight points on Leclerc – the difference between a win with fastest lap and second place – and nine on Perez to clinch the title at Suzuka on Sunday.