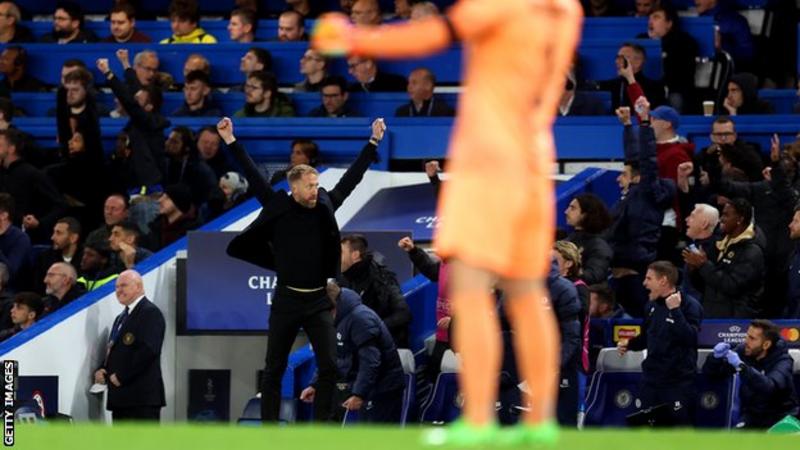 Chelsea’s Champions League campaign kicked into gear with an emphatic and fully deserved win over AC Milan at Stamford Bridge.

New manager Graham Potter knew victory was essential after a poor start to their group phase with defeat away by Dinamo Zagreb finishing Thomas Tuchel’s reign before a draw at home to Red Bull Salzburg.

And Chelsea delivered in style, with England right-back Reece James the star man as they eventually overpowered Milan.

Wesley Fofana scored his first goal for the club after 24 minutes when Milan failed to clear a corner, although the £70m defender’s night was soon ended by injury.

The Italians almost equalised right on half-time when Rade Krunic fired over with the goal at his mercy.

It was a rare anxious moment and the second half belonged to Chelsea, and James in particular, the right-back demonstrating why he commands such faith at club level and from England manager Gareth Southgate.

James was the provider after 56 minutes when he crossed for Pierre-Emerick Aubameyang to apply a simple finish, then he was the finisher five minutes later with a powerful strike which flew high past Milan keeper Ciprian Tatarusanu at his near post.

Graham Potter will be delighted with the manner of this important win, not only because it gave Chelsea the three points they needed to boost their chances of reaching the Champions League knockout stage, but it was also just the sort of victory and performance any new manager wants early in their reign.

Chelsea stuttered against Salzburg and Potter admitted they rode their luck to beat Crystal Palace on Saturday but was this a comprehensive triumph over a Milan side that rarely threatened, apart from when the pacy and talented Rafael Leao was in possession, carving out the clear chance which Krunic somehow missed on the stroke of half-time.

Otherwise, this was a tale of Chelsea domination, the night only clouded by that injury to Fofana that Potter will hope does not prove serious.

After Fofana’s opening goal, it was left to James to demonstrate exactly why England manager Southgate is prepared to ignore the lobby for Liverpool’s Trent Alexander-Arnold to get a place in the England team at right-back.

James is close to the complete defender, solid in defence and also potent in attack here, making Aubameyang’s job easy for Chelsea’s second then crashing in the third himself.

James goes about his business quietly but ability, power and attitude make him a formidable proposition.

HAALAND SCORES A BRACE AS THE CITYZENS THRASH COPENHAGAN 5-0