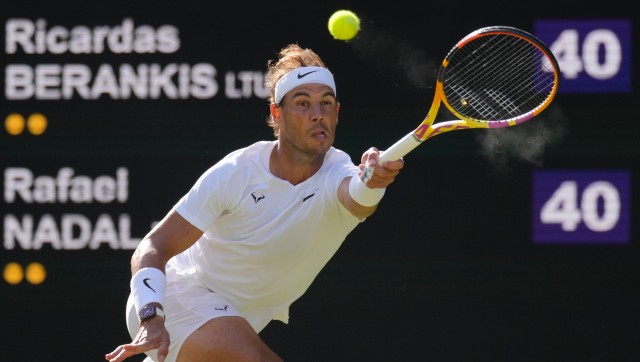 Rafael Nadal says he was “wrong” to take Lorenzo Sonego to task at the net as his “best match” of Wimbledon this year ended on a testy note.

The Spaniard won 6-1 6-2 6-4 with a stunning display to reach the fourth round that showed a marked improvement on his first two matches.

But it ended with boos as Nadal continued a discussion with Sonego, having had words in the third set.

“I have to say that I was wrong. So apologise for that. My mistake in that. No problem. I recognise that.”

The roof came on with Nadal leading 4-2 in the third, with the Spaniard appearing unhappy at the interruption.

Two games later he was upset over a noise Sonego had made during a point as the 27-year-old Italian set up his first break points of the match.

Nadal spoke to the umpire but then called Sonego to the net to speak to him, with the Spaniard then going on to lose his serve.

“My intention was never to bother him at all. Just to tell [him] one thing that was bothering me that I think he was doing in that moment, but that’s it,” Nadal said.

“I think there is some codes between players. We had some issues there. But that’s it.”

While Nadal then regained control over a match he had dominated and wrapped up victory quickly, he carried on speaking to the Italian at the net after they had shaken hands at the end.