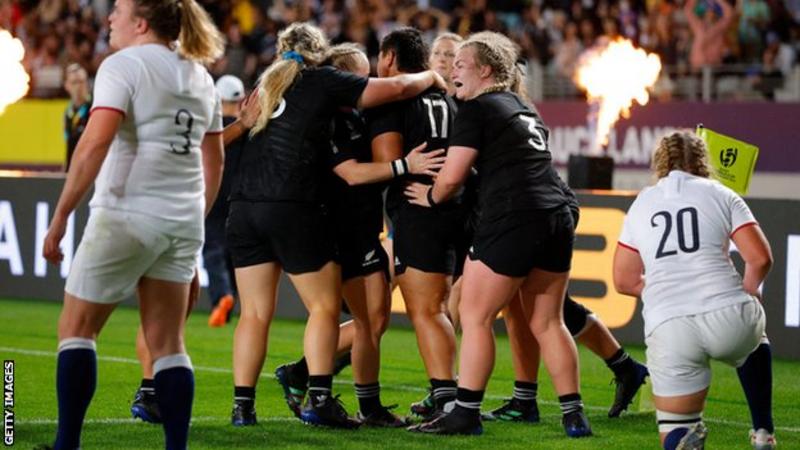 England’s winning streak came to an end in the most important game of all as New Zealand won the World Cup for a sixth time on a historic night for women’s rugby at Eden Park.

In what has to be one of the most dramatic World Cup finals of all time, the Red Roses went down to 14 players when Lydia Thompson was shown a red card in the 18th minute and led for most of the game.

England had lost four previous finals to New Zealand and their hearts were broken once again as Ayesha Leti-I’iga’s try regained a three-point lead for the hosts with nine minutes remaining.

The Red Roses had a chance at victory with one last line-out – their most potent weapon all tournament – with the clock in the red but lost their throw to the delight of a ferocious record crowd for a women’s game of 43,759.

Delight on the face of New Zealand’s players and fans alike was in sharp contrast to the England players, who stood tearfully with heads in hands as they reflected on the fact that their record 30-Test winning streak had ended when it mattered most.

As a full Eden Park roared its support of the pre-game haka, with England spread across the pitch and staring back non-pulsed, it was clear this would be a day that women’s rugby fans would remember for years to come.

Both sides saw the opportunity in front of them to send their sport stratospheric and delivered pure entertainment from start to finish.

England started at pace, giving New Zealand a taste of their own running game. They spread New Zealand wide and Emily Scarratt found Ellie Kildunne for the opening try.

There was enough action in the first 10 minutes for three finals and Amy Cokayne – who was called up to a Black Ferns camp as a teenager before choosing England – soon went over for her first of three tries in the Red Roses’ trademark driving maul.

New Zealand had relied on their unpredictable backline play in previous rounds but proved they could maul too as Georgia Ponsonby went over following a line-out immediately after.

Another England maul try – this time for Marlie Packer – prompted another Black Ferns response, with the Red Roses caught short as Leti-I’iga ran through plenty of open space to score her first try.

Again England turned to their pack, another try for Cokayne, as England’s focus collided with New Zealand’s chaos and Black Ferns prop Amy Rule closed out the half by peeling off the back of a maul to go over and make the score 26-19 in England’s favour at half-time.