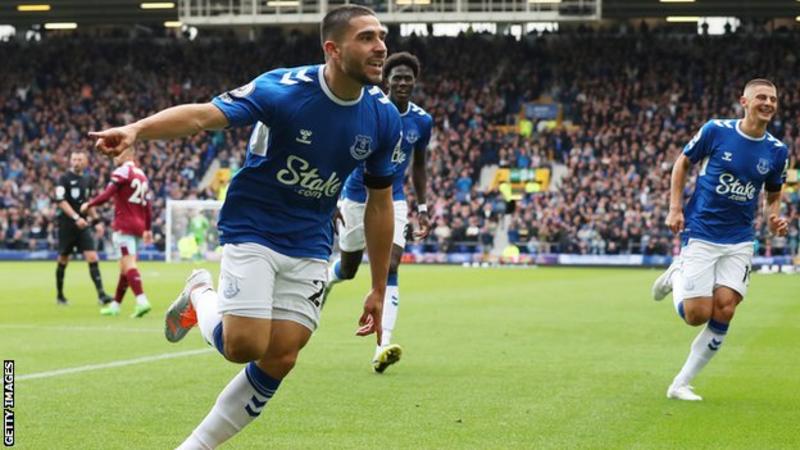 Neal Maupay opened his account for Everton to earn their first Premier League win of the season with victory over West Ham at Goodison Park.

Maupay, who joined from Brighton for £15m in August, turned on Alex Iwobi’s pass and smashed the ball past Lukasz Fabianksi as it sat up on the bounce.

The hosts had chances to extend their lead, with the impressive Demarai Gray having an effort saved by Fabianksi.

West Ham, whose tally of three goals is the joint fewest goals in the top flight, were toothless in attack.

Michail Antonio could only direct a header straight at Asmir Begovic, while Said Benrahma’s effort came back off a post.

Everton climb to 13th in the table, while West Ham remain in the relegation zone in 18th.

Everton get their reward as Hammers fall short

After losing their opening two games, Everton are unbeaten in five league games, but victory was elusive before West Ham’s arrival in Merseyside.

Everton started brightly and Gray provided a constant threat down the left, testing Fabianski thanks to a fierce effort with minimal backlift and often beating his man and flashing crosses across the box.

Everton have struggled in front of goal themselves – only West Ham and Wolves have managed fewer league goals this season – but Maupay, playing his second game, provided the cutting edge with an excellent finish.

West Ham had a quick turnaround following their Europa Conference League win at Danish side Silkeborg IF on Thursday, and their performance appeared lacklustre.

Although they 14 shots – double the number Everton managed – it was not until Maupay’s goal that the Hammers seemed to spark into life.

Antonio should have done more with his header before Benrahma’s effort caught Begovic and the Everton defence by surprise as it hit the woodwork.

Five league defeats from seven games will be a concern for West Ham manager David Moyes, whose side host fellow strugglers Wolves in their next match on 1 October.