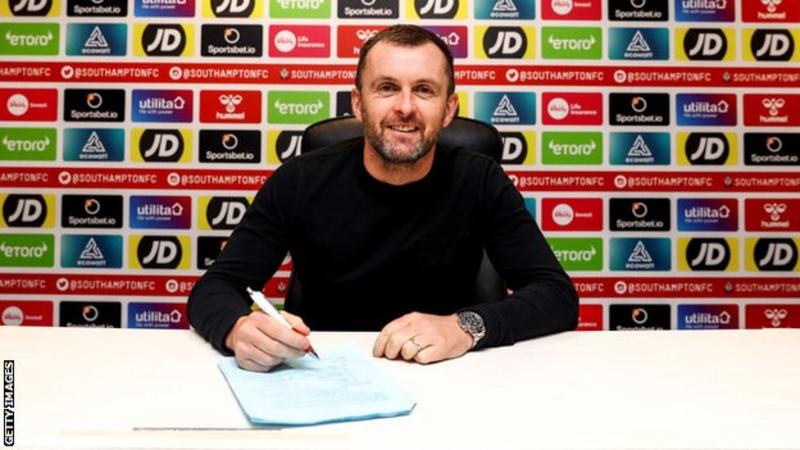 Southampton have confirmed the appointment of Nathan Jones as their new manager following the sacking of Ralph Hasenhuttl.

Welshman Jones, 49, has left Championship side Luton Town to take up the role and has signed a three-and-a-half-year contract.

Hasenhuttl, who was in charge for nearly four years, was sacked on Monday after Sunday’s 4-1 defeat by Newcastle.

“I’m really proud to be given this opportunity,” said Jones.

“I know a lot about the club from back in the days of The Dell, to coming here to St Mary’s, and it’s a wonderful football club.”

Jones watched from the stands as Saints beat Sheffield Wednesday on penalties in the Carabao Cup third round on Wednesday.

His first game in charge will be away at Liverpool on Saturday.

Hasenhuttl was dismissed after a run of one win in nine matches, with Southampton 18th in the Premier League.

Jones, who signed a five-year deal with the Hatters in January, ends his second spell at Luton with the club ninth in the Championship.

He will be joined at St Mary’s by first team coaches Chris Cohen and Alan Sheehan.

“A lot of my family are Southampton fans, which doesn’t half help,” Jones said.

“I wanted to manage in the Premier League, I’ve dreamt of that since I became a coach, but this club in particular – because of how it’s run, because of the structure, because of how they look deeper than just results – really appeals to me.”

Jones led Luton to last season’s play-offs, where they were beaten by Huddersfield Town in the semi-finals.

The former Brighton and Yeovil player took the reins at Luton for his first full-time managerial position in January 2016 when they were struggling near the bottom of League Two.

He guided them to promotion in 2018 and the Hatters were second in League One in January 2019 when Jones left for an ill-fated spell in charge of Stoke City.

During his 11 months with Stoke they won just six of 38 matches. Jones moved back to Kenilworth Road in May 2020, speaking of his “regret” at leaving before resurrecting his career during a successful second spell with Luton.

The Hatters were 23rd in the Championship but he helped them stave off relegation on the final day of the 2019-20 season that had been interrupted by the Covid-19 pandemic. Luton finished 12th the following campaign.

Gary Sweet, chief executive of Luton, thanked Jones, saying: “He has given us some fantastic memories and a team to be constantly proud of.

“The fact we are looking up towards the Premier League, rather than down towards League One as we were when we brought Nathan back to the club, makes the Luton Town job an attractive one.”