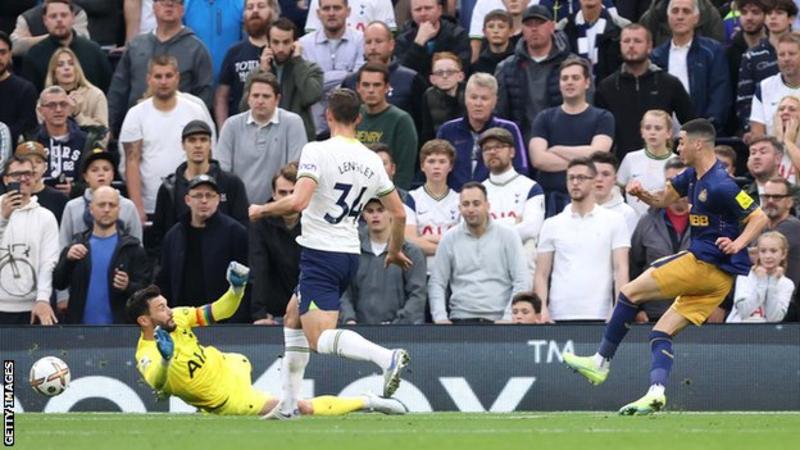 Newcastle United’s impressive early season form continued with a superb win at Tottenham which lifted them up into fourth in the Premier League table.

They went ahead in contentious circumstances, Callum Wilson finding the net with an excellent lob from outside the box after colliding with Hugo Lloris.

The goal was awarded after a lengthy video assistant referee (VAR) check for a foul and handball, but there was nothing controversial about the second goal before half-time.

A poor clearance by Lloris was intercepted by Sean Longstaff before Miguel Almiron beat one opponent and went around another and fired under the Spurs keeper for his fifth goal in five league games.

Spurs pulled a goal back through Harry Kane’s low header from close range, awarded after another lengthy VAR check for offside, but Newcastle held on to secure the points.

While it is the first time Newcastle have been in the top four of the table with 12 games played since April 2012, Tottenham have now lost their last two and are in danger of going backwards.

They started positively with Son Heung-min and Harry Kane both denied by visiting keeper Nick Pope.

But, with thunder and lightning in the air, Spurs struggled as the weather deteriorated and in the end they could have few complaints about the outcome. 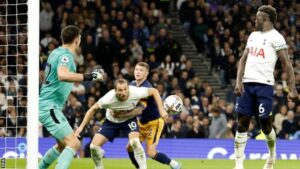 There were joyous scenes after the final whistle as Newcastle’s players and staff celebrated on the pitch in front of their jubilant travelling fans.

It is hard to believe that just six month ago Eddie Howe’s side crumbled to a 5-1 defeat at Spurs, but they are a different proposition this season and their campaign continues to go from strength to strength.

Newcastle have not played in Europe since 2012-13, while not since 2002-03 have they appeared in the group stage of the Champions League.

But Howe and his players have their fans dreaming of a return to the continent after another efficient performance.

Once again Newcastle were well organised and continue to pick up points despite missing forward and record signing Alexander Isak, who has been out since September with a thigh injury.

Even after Kane gave Spurs hope with his 10th league goal of the season, the Magpies did not panic, with Fabian Schar and Sven Botman frustrating the hosts when they piled forward in search of an equaliser.

Newcastle are establishing a reputation for being hard to beat. Their last defeat was on 31 August at Liverpool when they conceded a 98th-minute goal.

There is a long way to go and bigger tests to come but Newcastle look good value for their place in the top four.