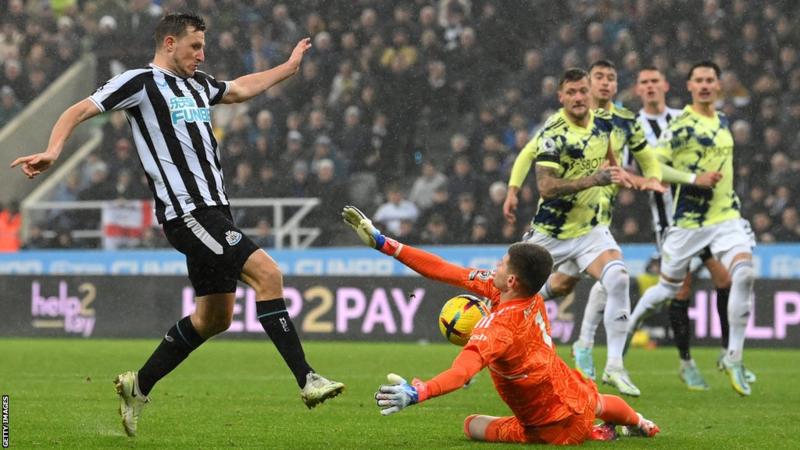 Manager Eddie Howe said 2022 had been a “year of real progress” after Newcastle ended it third in the Premier League despite being held to a goalless draw at home by Leeds.

The Magpies go into 2023 a club transformed from the one that, three months after their Saudi Arabia-backed takeover, were 19th in the table a year ago.

“2022 has been a great year,” Howe said. “The team has developed really well.

“We have had some great results. There are big challenges ahead but we look forward to those.”

Newcastle offered almost all the attacking threat at St James’ Park but were unable to find a winner which would have given them a seventh consecutive league win.

Leeds goalkeeper Illan Meslier saved excellently from both Chris Wood and Fabian Schar in the second half, which was played almost exclusively in the visitors’ territory.

Still, Newcastle are now unbeaten in 12 games – a run which goes back to August – and are two points behind second-placed Manchester City. They are nine adrift of leaders Arsenal, who increased their cushion with victory against Brighton.

The hard-earned point for Leeds, who had one shot on target all match, moved them up a place to 14th.

This time a year ago the thought of Howe refusing to rule out a title challenge, as he did before this game, would have been fanciful at best.

They end the year in the top three for only the third time in the Premier League era – and the first since the 2001-02 campaign.

Much has been made of Newcastle as an attacking force this season with Miguel Almiron the most obvious improvement. Despite almost constant pressure, the winger was largely kept in check by Leeds’ resolute defence, who repelled wave after wave of Newcastle attack.

Sean Longstaff blazed over from inside the area but otherwise Newcastle’s clearest opening came from set-pieces with Kieran Tripper’s delivery proving dangerous.

Meslier spread himself to make the block at the feet of Wood after a knock-down and saved with his feet to keep out Schar’s header.

Callum Wilson, fit again after illness, came on after 64 minutes for his first appearance since the World Cup but was kept quiet.

“It is a sign of how far we have come that they were timewasting and doing everything they could to take time out of the game,” Howe told Sky Sports. “All that was missing was the final third.

“It was one of those days for us. We had enough chances to win the game comfortably.”

Newcastle’s next match, a visit to Arsenal on 3 January, will offer some indication of whether they can indeed mount a title challenge.

Meanwhile, the clenched-fisted celebrations at the end from Leeds, whose one goalbound effort was a curling strike by Rodrigo tipped away by Nick Pope, suggested this was a point gained from their perspective.

“I feel good about coming here and getting a draw,” Marsch said. “The first half was good from us but in the second half they started playing every ball into our end.

“I’m happy with how we dealt with the crowd and the mentality to get a draw and keep a clean sheet.” 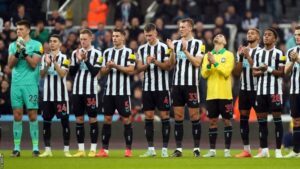