Benzema played a one-two with Vinicius Jr and tapped the Brazilian’s unselfish return pass into an empty net from six yards out.

Casemiro had a goal ruled out by the video assistant referee in the first half for offside.

Rayo matched their more illustrious opponents and had several chances.

Forward Sergi Guardiola had eight efforts, including several headers off target. Thibaut Courtois had to pull off a good double save to deny Oscar Trejo and Alvaro Garcia not long before the go.

Vallecano keeper Luca Zidane, son of Real legend Zinedine, had a good performance against his old club, denying Marco Asensio with an excellent fingertip save.

Rayo have yet to win in La Liga in 2022 and have now lost their last five league games.

Elsewhere, Atletico Madrid moved up to fourth in La Liga – overtaking Barcelona – with a 2-0 win over Celta Vigo.

Second-placed Sevilla host Real Betis and Barcelona are at home to Athletic Bilbao on Sunday. 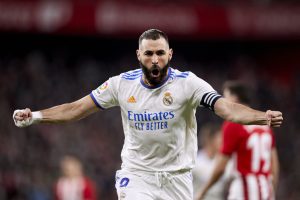