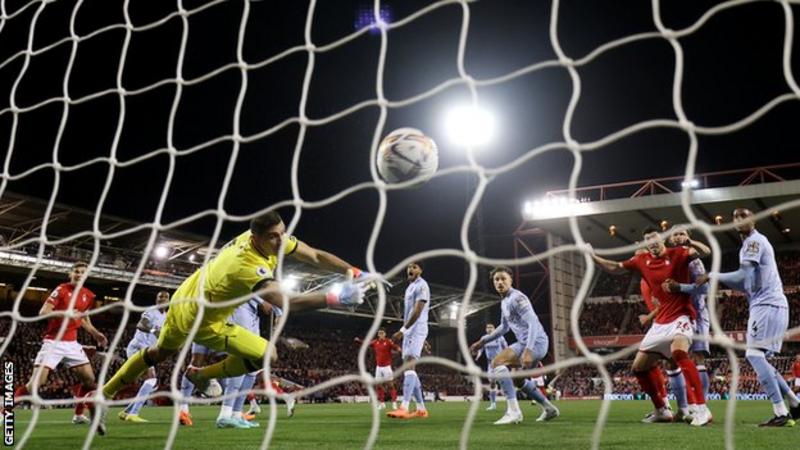 Nottingham Forest moved off the bottom of the Premier League with a hard-fought draw against Aston Villa.

The result ends a sequence of five consecutive defeats for Steve Cooper’s side, who move up to 19th in the table, a point above Leicester and four behind Villa who remain 16th.

Roared on by a vociferous City Ground crowd, Emmanuel Dennis gave the hosts the perfect start, capitalising on some poor marking to head in Morgan Gibbs-White’s free-kick after drifting across the front of a static Villa defence.

However, Ashley Young levelled seven minutes later with a superb effort from 25 yards that flew into the bottom left corner.

It was Young’s first goal for Villa since 2011 – when he was in his first spell at the club – and it was the only notable moment of attacking inspiration from two sides that otherwise struggled creatively in the final third.

Steven Gerrard’s team had an Ollie Watkins effort correctly ruled out for offside and appeals for a penalty waved away when Forest captain Ryan Yates appeared to catch Ezri Konsa, too often their final ball or shot lacked the precision to trouble home goalkeeper Dean Henderson.

While Cooper would have wanted to celebrate his new contract at the City Ground with a victory, he will be able to take plenty of satisfaction from seeing his team arrest a damaging run of results that saw his future at the club questioned.

With Filippo Giraldi having recently been installed as sporting director to put the structures in place to help Forest compete in the top flight again, Cooper’s first job was to end a dismal run that had seen them concede 18 goals in 450 minutes of football.

Having made five changes to his starting XI from the 4-0 humbling at fellow strugglers Leicester, he was rewarded with a performance that offered more solidity and was brimming with application.

When Villa threatened to carve them open, there was always a retreating Forest defender on hand with Yates’ superb intervention preventing Ollie Watkins from tapping in at the far post.

Meanwhile, Villa will be frustrated. John McGinn, Philippe Coutinho and Emiliano Buendia were all included in Gerrard’s starting XI but none were able to deliver a telling moment for their side.

A well-worked early corner routine that saw McGinn scuff his shot into a posse of a defenders was in keeping with what was to follow for the visitors.

Villa enjoyed plenty of possession but lacked potency once they approached the Forest penalty area, with just two of their 12 efforts on goal on target.

NAWOJ SEEKS MORE INVESTMENT IN EDUCATION OF THE GIRL CHILD