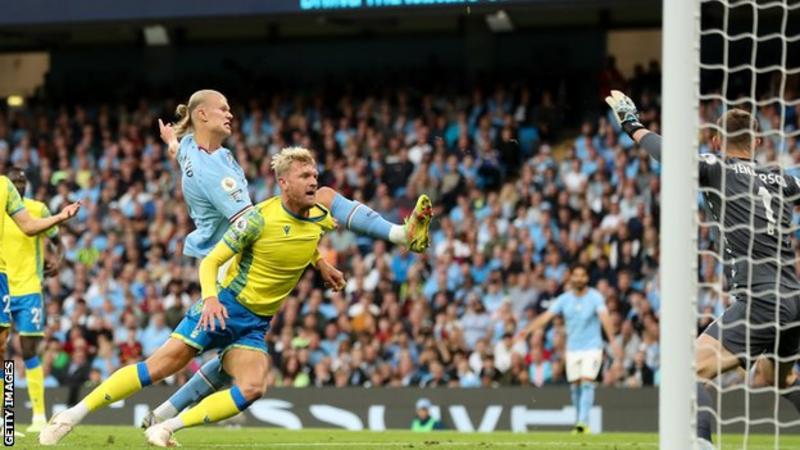 After his 19-minute three-timer against Crystal Palace at the weekend, there was a comparatively pedestrian 26 between his first and last goals this evening.

Yet if the two games are combined, Haaland scored an incredible six times in an hour given the Norwegian was replaced six minutes before the end of the Palace game. It takes his overall tally for the season to nine.

On his full Premier League debut, the Argentine produced a fine finish to beat Dean Henderson after being set up by Riyad Mahrez.

Then, after Kevin de Bruyne had nicked possession inside his own half and burst forward 50 yards, Alvarez picked his spot and finished high into the roof of the Forest net after Mahrez’s shot had been deflected into his path.

There were not that many who felt Haaland would find it difficult adjusting to life in the Premier League, but there were some. They have already proved to be hopelessly wrong.

It is impossible to know how this season will play out at such an early stage, but at the end of it, no-one will be saying the Norwegian is a bad fit.

His movement may not be a fit for City’s fluid style but his quickness of movement, intelligent running, strength and cool finishing make him a hugely dangerous threat.

Haaland was having his shirt pulled as he advanced onto Phil Foden’s curling cross for his opener. He was part of a fantastic one-touch passing move for the second which ended with the loose ball from a slide tackle on Foden presenting him with a tap-in. He shrugged opponents out of the way to make sure he was in the right place to head home John Stones’ nod-back for his third.

Guardiola spoke last season about adding someone to his squad who could sniff goals in the way Sergio Aguero used to.

It is worth noting Aguero scored six goals in his first five games after joining City from Atletico Madrid in 2011.