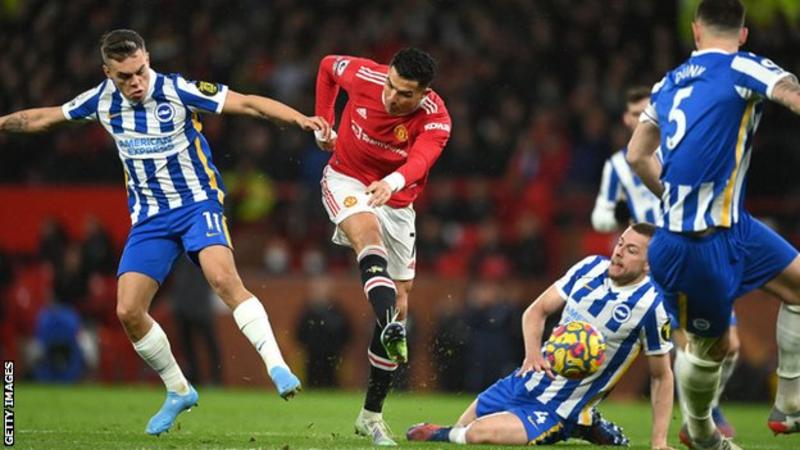 Bruno Fernandes added a second as United broke from deep inside their own half in the final minute of injury-time.

After a tepid opening period, Ronaldo struck six minutes into the second half.

The Portuguese collected Scott McTominay’s pass before edging right of the Brighton defence and, with barely any backlift, sent a low shot curling beyond a static Robert Sanchez.

Fernandes wasted a glorious chance when he failed to get past Sanchez with only the Brighton keeper to beat, before Ronaldo nodded an excellent chance wide of the far post.

It meant United breathed a sigh of relief when Jakub Moder’s speculative effort from the corner of the box bounced back off the bar with David de Gea beaten.

Brighton were still trying to salvage something from the contest when Fernandes struck with virtually the final kick.

In his pre-match interviews, United’s interim manager Ralf Rangnick spoke about his team needing to be more Dr Jekyll and less Mr Hyde. Sadly, for the German, the first half had far more evidence of the latter, evil, side.

When United were pressed with any great intensity, they gave the ball away. Restored to the starting line-up ahead of Paul Pogba, Fred was one culprit when he delivered a straight pass intended for Ronaldo straight to Adam Webster, who was not much more than a couple of yards away.

But the Brazilian was not on his own. Indeed, as Ronaldo drove a free-kick in a promising situation at the end of that disappointing opening period into the wall, it was hard to think of a redeeming feature for the hosts.

They did create one decent chance, when Ronaldo’s backheel sent Jadon Sancho running into the box. But once Brighton keeper Sanchez had turned the England man’s shot away, the best bit of United play was De Gea’s excellent save to deny Moder’s header.

The boos that accompanied the half-time whistle were predictable and when Pogba emerged late after the break and missed the start of his warm-up, it appeared United’s shambolic evening would continue.

Instead, the Frenchman was on the touchline to join the applause as Ronaldo struck the crucial 51st-minute opener.

Ronaldo knew he should have had more goals, though, and kicked an advertising hoarding in frustration as a header from a corner went narrowly wide.

However, after an unsatisfactory period for both player and team as leads have been lost in three successive games, at least this time they were able to secure a much-needed victory.