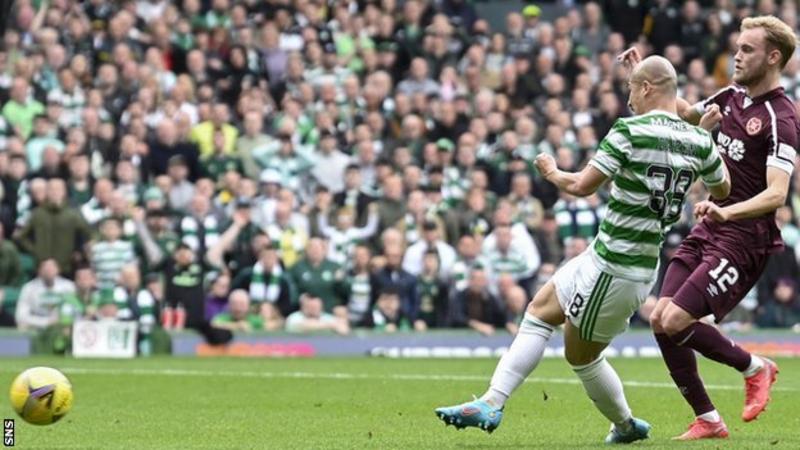 Celtic roared back to all but secure the Scottish Premiership title with a rousing victory at home to Hearts.

Matt O’Riley and Giorgos Giakoumakis sealed the win that puts Celitc nine points clear of Rangers, who have three games to claw back the deficit plus an inferior goal difference of 22.

If Giovanni van Bronckhorst’s Europa League finalists fail to beat Dundee United at Ibrox on Sunday, the title will mathematically be beyond last season’s league winners, but even victory will almost certainly be delaying the inevitable.

Celtic travel to Tannadice – the ground where they relinquished the trophy last season – on Wednesday. Should Rangers win on Sunday; a point will be enough for Ange Postecoglou’s men to confirm their status as champions.

Hearts, who pushed for a leveller before O’Riley increased the hosts’ advantage, have already secured third spot.

While Rangers’ Europa League party had just about died down on the south side of the river, Celtic were looking to start their own by effectively reclaiming the title from their rivals with a 25th win in 30 league games.

Hearts did their best to halt the league leaders’ pursuit by silencing the boisterous home support with an early opener when Simms spun in the box under pressure before crashing a fine finish past Joe Hart.

On first viewing, it looked like the Everton loanee may have been offside, but replays showed Carl Starfelt’s foot was playing the striker on.

After a ropey first 10 minutes, Celtic showed signs of clicking into gear when David Turnbull, on his first start since mid-December, and Kyogo forced Craig Gordon into sharp saves.

O’Riley was next to be denied when Stephen Kingsley headed away his goal-bound effort. But Postecoglou’s side soon got the goal their relentless pressure merited when great work from Jota down the right saw the winger slide the ball across goal for Maeda to sweep in a leveller.

Hearts were incensed, claiming a free-kick should have been awarded for a foul on Toby Sibbick in the build-up, but referee Steven McLean waved play on.

The first-half turnaround was complete seven minutes later and Jota was again the provider, towering at the back post to set up Kyogo, whose close-range header just about crossed the line despite Gordon’s best efforts.

Robbie Neilson’s side pushed for a second-half equaliser without creating anything clear cut, but the game was beyond the visitors when O’Riley, who had smashed a shot off the left-hand post 10 minutes earlier, drilled low into the far corner from the right of the box.

Celtic polished off the comeback win when Giakoumakis slammed in a fourth after Gordon had denied Reo Hatate with another top save, a goal that takes Postecoglou’s free-flowing champions-elect to 85 for the league season. 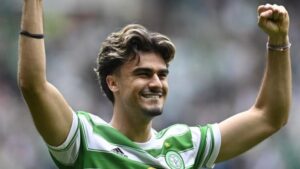