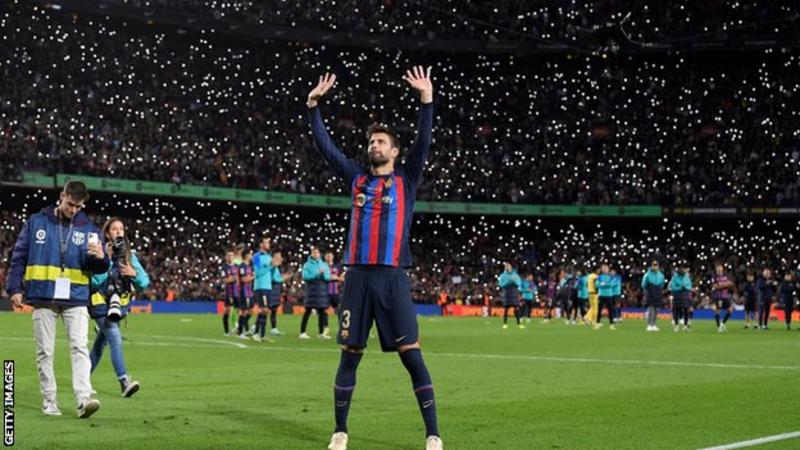 Barcelona legend Gerard Pique was given an emotional standing ovation as he made his final Nou Camp appearance in their 2-0 La Liga win over Almeria.

He was replaced in the 84th minute and tearfully embraced all his team-mates, boss Xavi and the entire Barca bench.

The 35-year-old will retire after Tuesday’s trip to Osasuna, although it is not certain he will play in that.

After the game he gave a speech on the pitch, saying: “I was born here and I will die here.”

He added: “When you get older, you realise that sometimes to love is to let go. I’m convinced that I’ll be here again in the future.

“I love Barca. That’s why I consider it’s the right moment to go. This is not a goodbye.”

There were several tributes to him on his farewell night at the Nou Camp.

Pique, who was named captain, walked on to the pitch with his two sons, as all his team-mates wore shirts with his name and number three on the back. 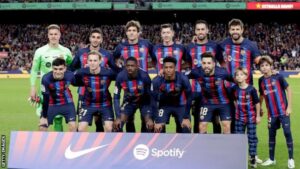 There was a huge banner on the pitch that said ‘Sempr3’ (For3ver) and a video celebrating Pique’s career was played on the big screen to the fans as well.

Barcelona won an early penalty with their fans chanting for Pique to take it. But the Spaniard pointed to Robert Lewandowski, who stepped up and hit the post.

Pique, who scored 53 goals for Barcelona, headed a chance over the bar and had another saved by Fernando Martinez.

At full-time Pique came back onto the pitch to applaud the fans and was throw into the air by his team-mates. 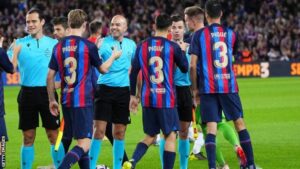 Barcelona players all came out with Pique 3 kits

The ex-Spain defender announced his decision on Thursday, despite having 18 months left on his deal, and his exit will help Barca with their wage bill.

Pique won 30 trophies and made 616 appearances for Barca after joining in 2008 from Manchester United.

Barcelona reportedly put Pique under pressure to leave to ease their financial issues. He was their fifth-choice centre-back this season, although has still played 10 times.

As well as other business interests, Pique owns FC Andorra, who play in the Spanish second tier.

Pique played the fifth most games of any Barcelona player – with the four players above him all team-mates at one time or another – Lionel Messi (778), manager Xavi Hernandez (767), current Barca midfielder Sergio Busquets (694) and Andres Iniesta (674).

Only Messi (35) and Iniesta (32) won more trophies for Barca than Pique. 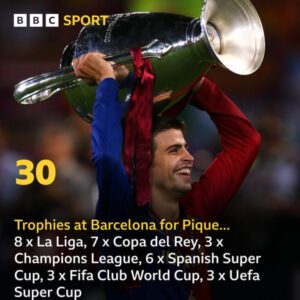 He started his senior career at Manchester United, playing 23 times and also having a loan spell with Real Zaragoza in that time.

He made 13 first-team appearances in 2007-08 as United won the Community Shield, Premier League and Champions League – before going back to Barca four years after leaving their youth set-up.